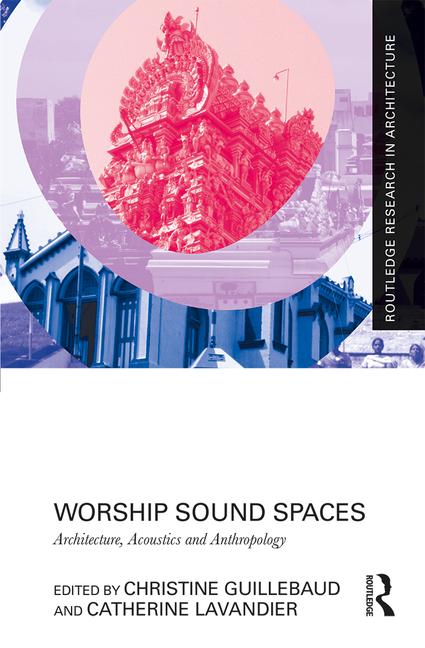 Worship Sound Spaces unites specialists from architecture, acoustic engineering and the social sciences to encourage closer analysis of the sound environments within places of worship. Gathering a wide range of case studies set in Europe, Asia, North America, the Middle East and Africa, the book presents investigations into Muslim, Christian and Hindu spaces. These diverse cultural contexts demonstrate the composite nature of designing and experiencing places of worship. Beginning with a historical overview of the three primary indicators in acoustic design of religious buildings, reverberation, intelligibility and clarity, the second part of this edited collection offers a series of field studies devoted to perception, before moving onto recent examples of restoration of the sound ambiances of former religious buildings. Written for academics and students interested in architecture, cultural heritage, acoustics, sensory studies and sound.

The multimedia documents of this volume may be consulted at the address:

1. Characterizing the acoustics of places of worship: Should we believe in acoustic indicators? Marc Asselineau

2. Towards a history of architectural acoustics using archeological evidence: What recent research on the uses of acoustic pots contributes to understanding of the quest for sound quality in 11th to 17th century churches. Jean-Christophe Valière and Bénédicte Palazzo-Bertholon

PART 2. Experiencing the sacred through sound

5. What should the reverberation inside a masjid be? A study exploring the demands of Imams. Ahmed Elkhateeb

7. Bells, auspiciousness and the god of music: Reflections on sound in ritual space in Nepalese Hindu traditions. Astrid Zotter

8. Resonant voices and spatial politics: An acoustemology of citizenship in a Muslim neighbourhood of the Kenyan coast. Andrew J. Eisenberg

PART 3. Restoring the sound ambiances of the past

A world of attunements. Jean-Paul Thibaud

Christine Guillebaud, a social anthropologist and an ethnomusicologist, is a Research Fellow at the French National Centre for Scientific Research (CNRS). She is the co-Director of the Research Centre for Ethnomusicology (CREM-LESC), located at the University of Paris Nanterre. Her academic interests include anthropology of sound, sound studies and the study of urban ambiances. She is currently leading the MILSON research program (milson.fr), dedicated to the study of sound environments in their sociocultural context of production and perception. She has carried out long-term fieldworks in India and edited the volume Toward an Anthropology of Ambient Sound (Routledge, 2017). Previously, she has published numerous articles and edited volumes on musical creation, multimodality, cultural heritage, intellectual property and sound humour.

Catherine Lavandier holds a civil engineering diploma and is professor in building acoustics at the civil engineering department of the technological institute in the University of Cergy-Pontoise, France. Her academic interests include room acoustic quality with a psychophysical approach (her PhD focused on the acoustic indicators needed to characterize the acoustic quality of concert halls) and soundscape quality with an ecological approach. She is regularly involved in French national or European projects whose common aim is to link the physical world of acoustics to the sound perceptions or to the sound representations of people. She participated in the European research network COST TD0804 « Soundscape of European Cities and Landscapes ». Currently, she works on the audio-visual interactions for outdoor and indoor environments.